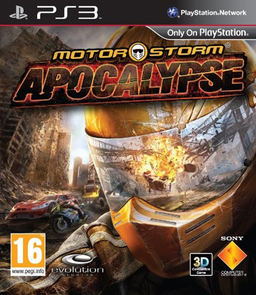 The game delayed worldwide due to the terrible events in Japan some time ago. Following hot on the heels of the highly successful Pacific Rift game evolution studio brings us Apocalypse. A frantic racer set in a world that’s falling apart from the very core. It offers to bring us break neck racing on top of buildings to roads that collapse as you cross them, to racing in the sewers. Its racing but not as you know it!

Pros:
Cons:
In summary, If you can get around the handling issue and collision detection you will get a rewarding high octane racer. The explosions and edge of your seat thrills will keep any adrenaline junkie happy.